Here’s a nice little compilation illustrating what a long journey Wee Winn has been through over these months. Look and be amazed at its transformation!

Wee Winn has been progressing a lot these past several weeks. Herb has been working diligently on the boom, while Steve had made a cradle for the boat. 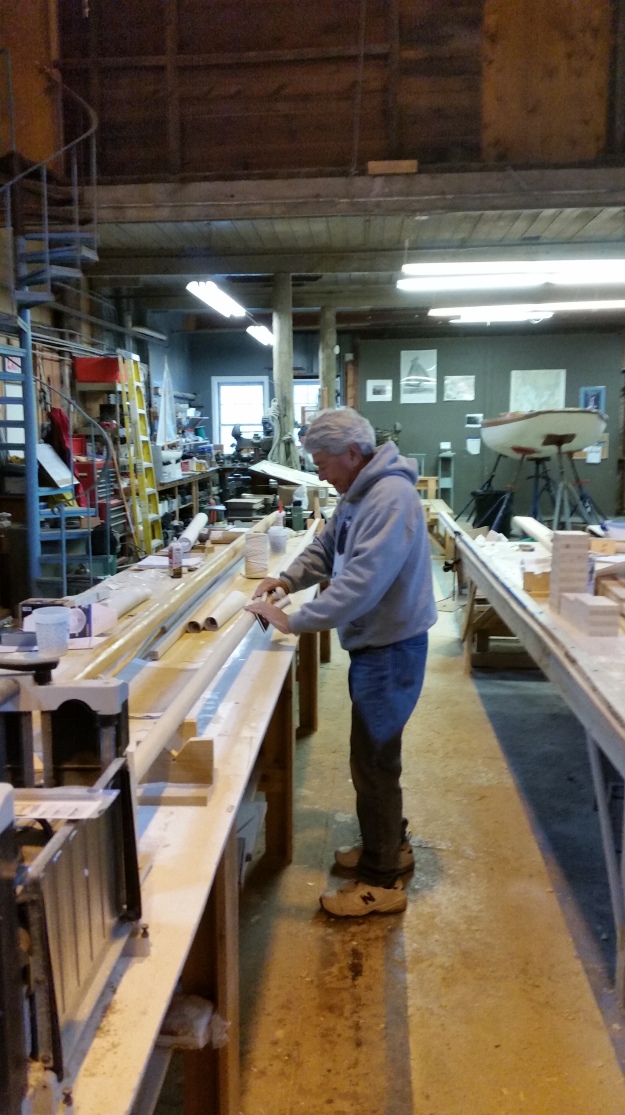 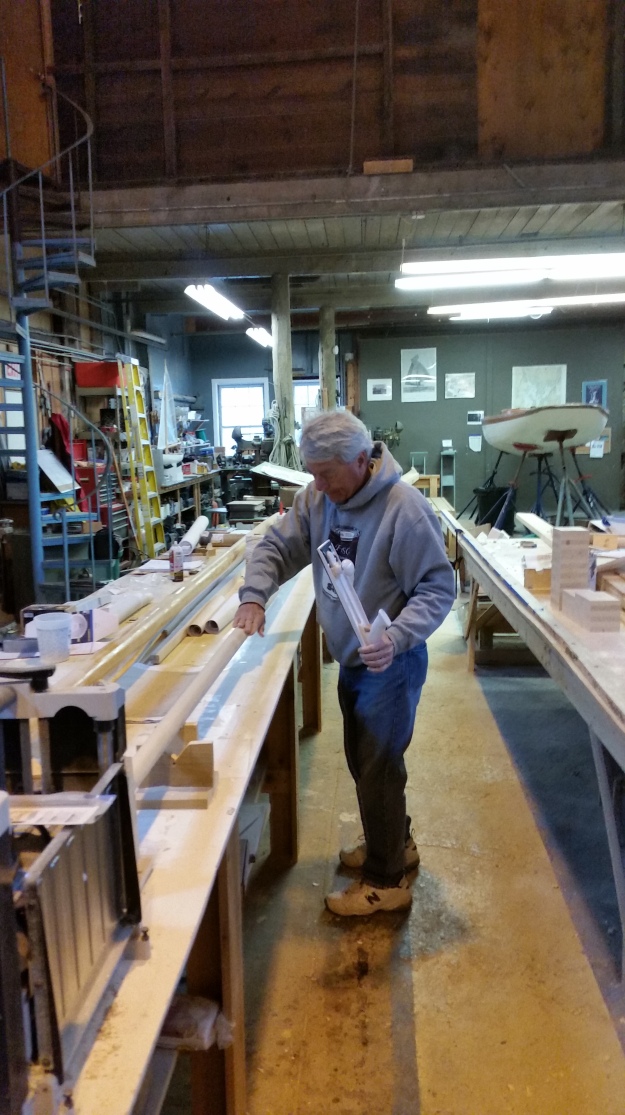 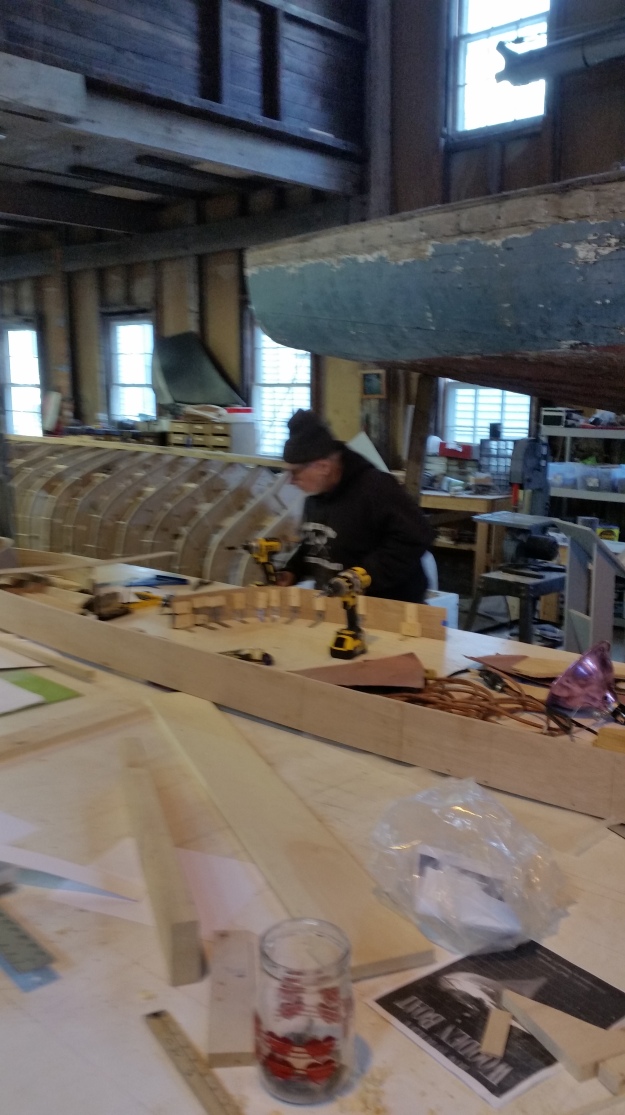 Meanwhile, Zach and Sandy measured out and highlighted Wee Winn’s water-line with a laser light (which was running dry on its batteries, making the process much more tedious than it should have been). 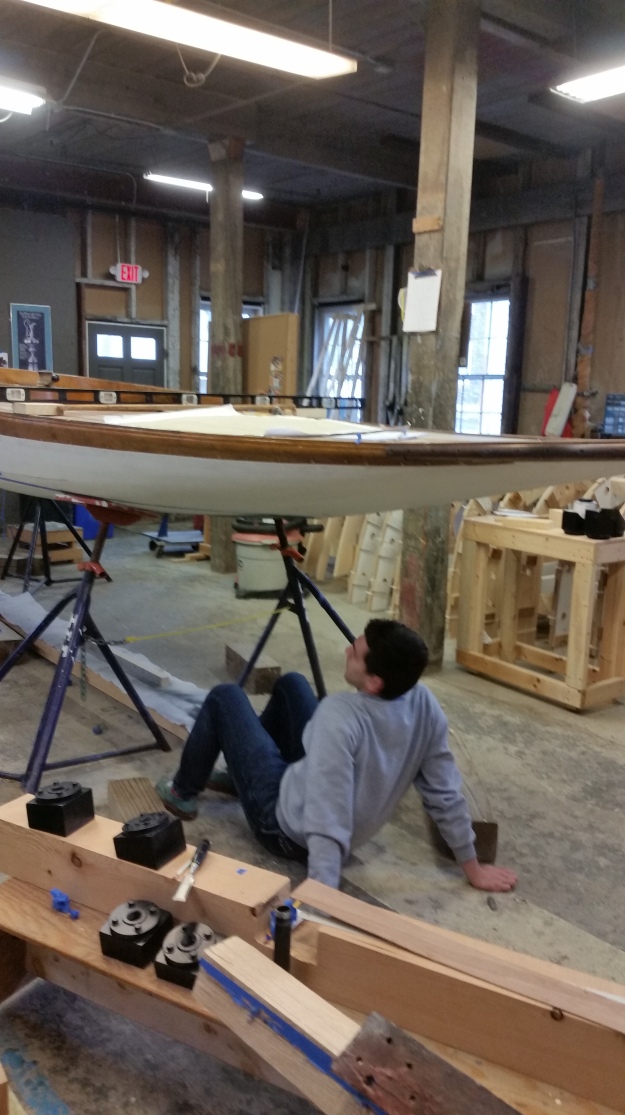 Once everything was up to their liking, the paint job began!

Amaryllis, a catamaran built by Herreshoff, is being taken down from the rafters to be cleaned and re-hung for better viewing pleasure. Upon bringing it down for inspection, we were surprised to see a speedometer and underwater speed measurement device in the hull! 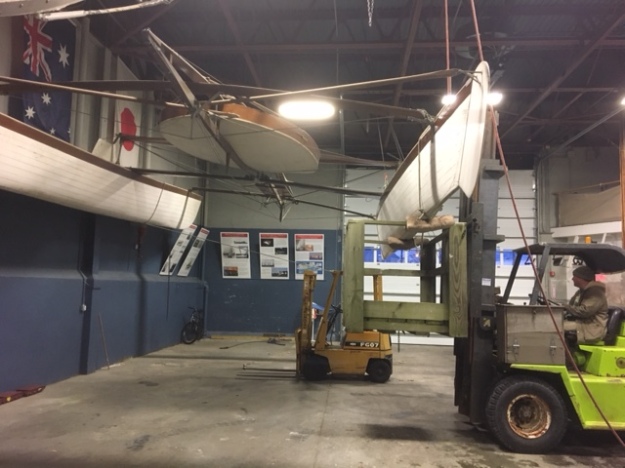 Here’s an old photo of the Amaryllis, for perspective. 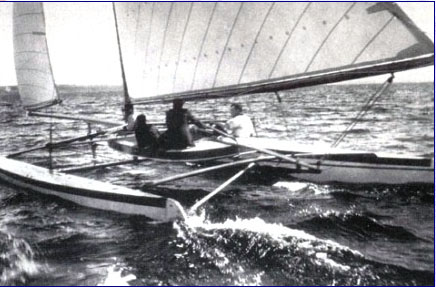 Meanwhile, our restoration of WEE WINN has been coming along nicely.

Craig finished sanding the bottom and then painted Kirby’s primer, while Bern and Sandy spent the day replacing bungs and making shallow countersinks for many screws on deck so they can be covered with caulk.

On the 21st of June, Executive Director Bill Lynn and the Board of Directors hosted a party to thank the volunteers and local businesses who made the RELIANCE Project possible. It was a very special moment since Gov. Gina Raimondo was the guest of honor. As she walked around speaking to each volunteer and local business contributor, everyone was anxious to tell her of their efforts and pride in RELIANCE. 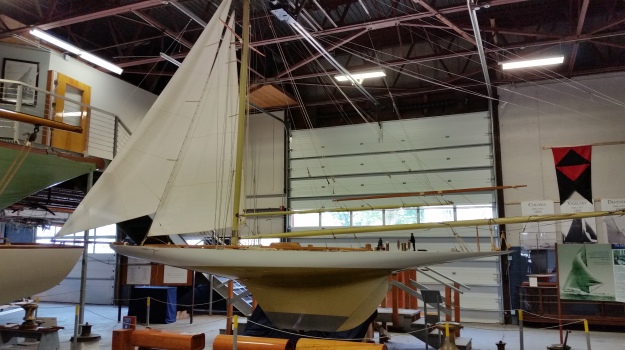 It was very evident from her remarks that she was overwhelmed by their pride, the beauty of the model, and its importance to the museum and to Rhode Island tourism as a whole.

During the week leading up to the RELIANCE volunteer appreciation day, the team built out some accompanying exhibits highlighting the metal hull large yachts built by HM Co. The exhibit area is taking shape, and over the next several years we’ll build content to make a comprehensive exhibit. No rest for the weary!

Meanwhile, the last major rigging was added to RELIANCE. We’re hoping to display two new elements. Steve Thurston delivered a stunning #1 Jib Topsail. It is HUGE– long and lean. But, it is too large to haul up. We need that extra 14′ of clearance that isn’t in the Hall of Boats. Sometimes we just wish we could take a can opener and cut a hole in the roof!

We did, however, add the “club topsail club”, even though the topsail can’t be raised either. It enabled us to try out the rigging to sheet the club home. Very complex! Below shows the wooden club which serves as an extension of the gaff.

On the starboard side, the outer sheet leads through the reef block and then forward along the boom to tackle and a cleat. 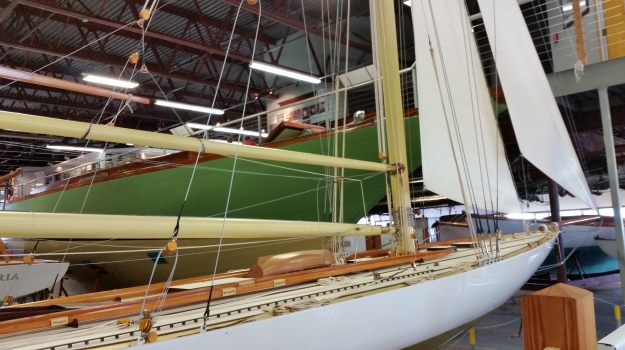 This starboard side arrangement is shown on a picture of RELIANCE.

On the port side, a sheet leads from a becket at gaff tip up to the club and back down again, where it leads to a pennant hanging from the portside of the gaff jaws. This pennant does not have a block, but rather a thimble through which the sheet travels. It leads to a block and tackle at the boom where it is tied off. The inner sheet is hitched to the inner end of the club and lead through a block on the gaff; a second thimble on this same pennant and then is tied off at the boom.

As we complete RELIANCE, several of our team are moving on to their next Museum projects.
Shown here, we’ve been stripping WEE WINN, a lovely “half rater” from 1892. It is a bulb fin keel boat built for Englishwoman Miss Winifred Sutton. She raced WEE WINN in Cowes that year, winning 20 of 21 races. 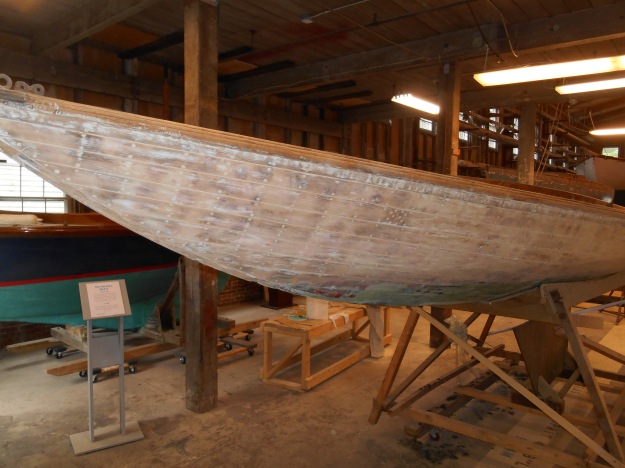 Our RELIANCE, WEE WINN, and steam launch #199 projects have attracted a new group of volunteers, and it’s exciting to feel their fresh enthusiasm and energy. Several are machinist artisans whose skills will be important to make a rudder and tiller for WEE WINN and to complete steam launch plumbing; you may remember that last year, volunteer Don Berrett restored a triple expansion steam engine which fits #199.

The museum held an event recently that focused on our RELIANCE Project, allowing us to fully celebrate the sum of all our work here. Speeches were given by museum director Bill Lynn, longtime family and friend Halsey Herreshoff, and–our guest of honor–Senator Jack Reed!

Sandy gave the closing speech, where he spoke about building the model through the hard work of our dedicated and amazing team. He also detailed the important exhibit messages RELIANCE has for us all.

Also in attendance was Barbara Bartram, widow of Joe Bartram, Jr. The Bartram family donated great deals to the RELIANCE Project in honor the former NYYC Commodore, who was instrumental in re-igniting the America’s Cup post-WWII. 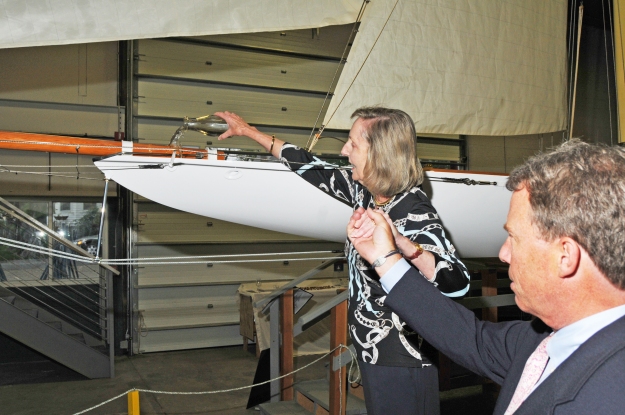 Overall, it was a very memorable night; it’s been nice to reap in some celebration after all the dedication!

The build up and preparation for Herreshoff’s opening day has been a bumpy road, but when we finally made it, we couldn’t have asked for a more successful and rewarding weekend. 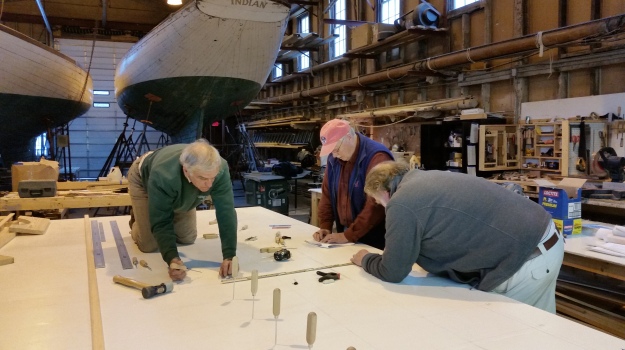 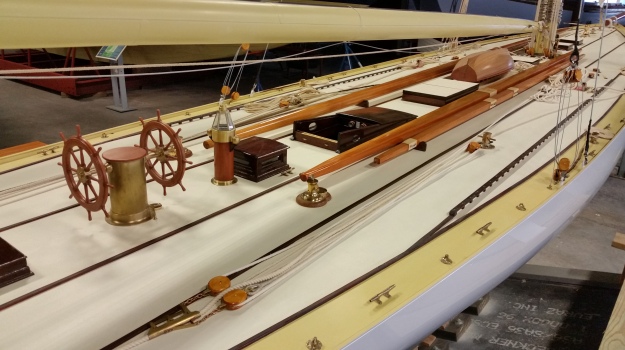 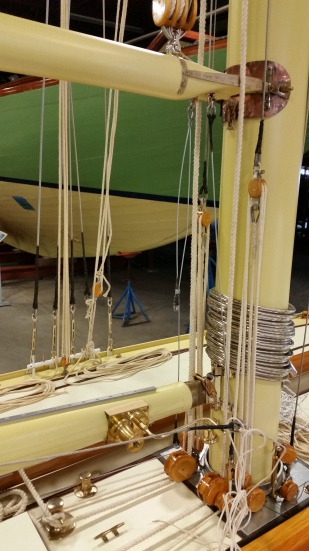 Thanks to the crew who had been working diligently to make this day a reality! Available for some photos (from left to right) were: Don Berret, Sandy Lee, Tim Horton, Joe Uzzo, Herb Luther, Bern Altman, and Laura Thompson. 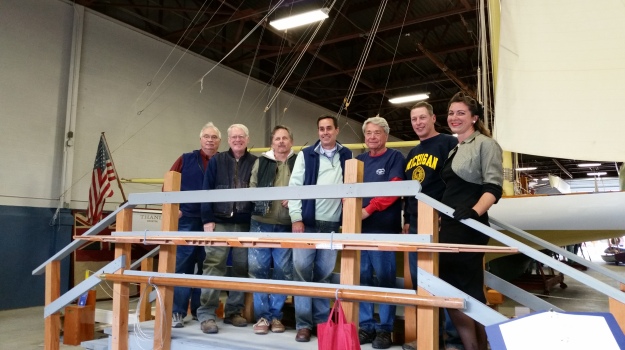