Never turn your back on our “morale officer”, Keith. He always has something up his sleeve; he probably lies awake at night thinking about puns, tricks, and displays. Last week, he took one of our GI Joes on liberty to Cape Cod, only to return with it donned in Santa garments. We’d like to thank Keith’s wife Mary Jo for making the Santa outfit.

Speaking of dressing: would anyone be willing to make an outfit for Mrs. Iselin? We have a description of her sailor’s dress.

Meanwhile, we’ve reach another major milestone on the project. On Tuesday, we fitted the last of our deck fittings in place; our deck is essentially complete, we just some touch-up to go, which we’ll do as part of the final wrap-up. These topmast running backstay staples were some of the several items plated by R. E. Sturdy and Co. They’ve been glued, riveted, and bolted into place to ensure they can carry the load.

Now we’re working at fittings for the boom and mast, the first of which has been fitted to the boom and temporarily to our stump mast. We still have some work to do on the goose neck assembly.

As many of you know, RELIANCE was launched 177 days from receipt of order and delivered to the Iselin syndicate 194 days after masting, rigging, and sail testing. So, we’re about 150 scale man-days complete! 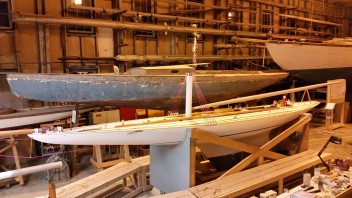