Sometimes there seems to be a lot of change, but other times there is a lot of work but not much apparent change. This was one of the latter session, but with much progress. The toe rails at the stern have been fabricated and stained and pinned in place. The starboard handrail made and stained and also pinned in place along with accompanying toe rails. Steve has been working on the starboard pin rail and making sure the belaying pins are properly seated. The outboard belaying pins and center eye are actually part of the stanchions and have been tapped, threaded and glued into the deck. Chocks for the spare #2 yard and club stowed on deck were made and the #2 topsail club placed in its resting place. Herb has been gluing up the #2 yard. Meanwhile Mike has been finishing up three large bollards; two of which are seen in photo 4 in front of the hatch and one amidships portside in photo 1. More deck fittings should be arriving over the next weeks. 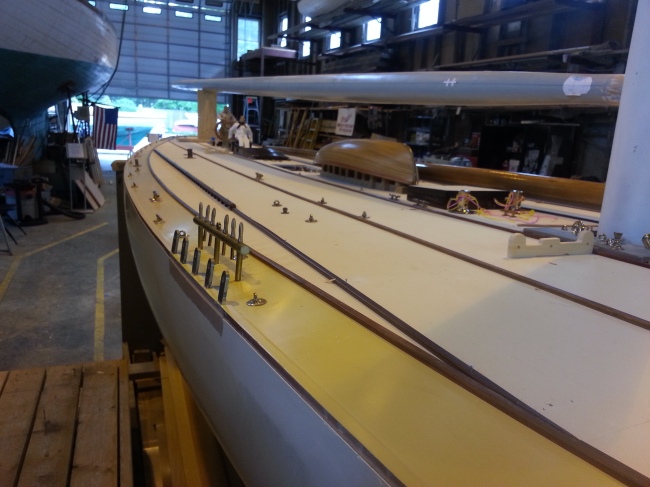 Another productive time last week with the crew. We completed two of the three starboard toe rails, finished the second of three forward hatches, and progressed on the fantail toe rail. 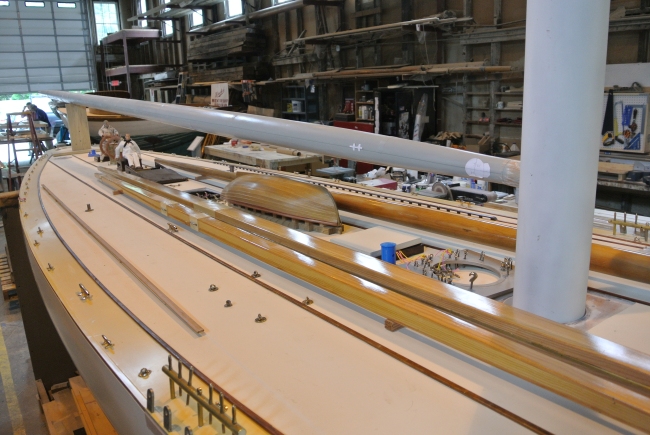 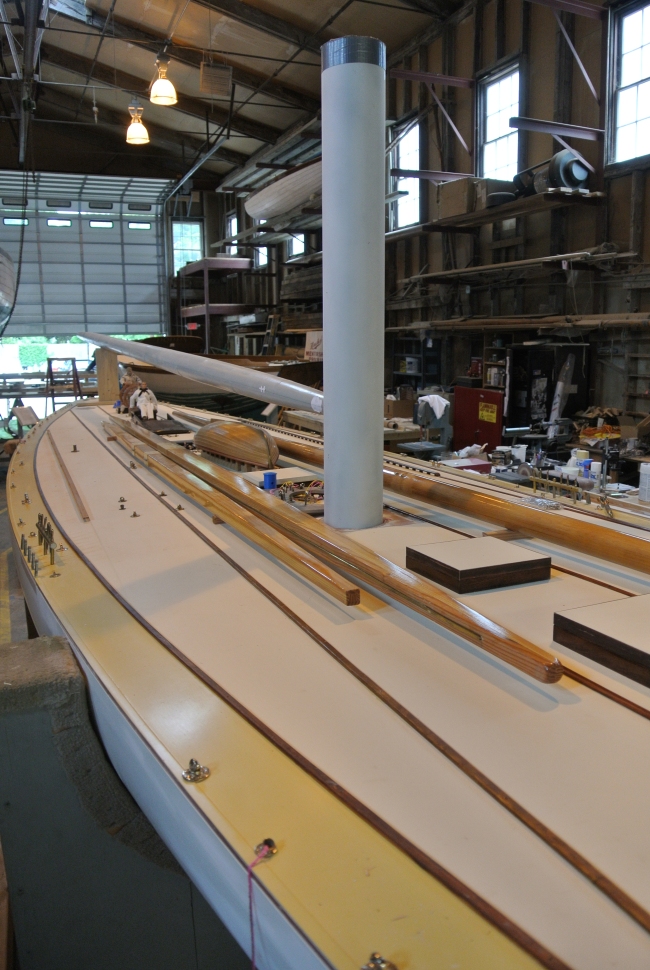 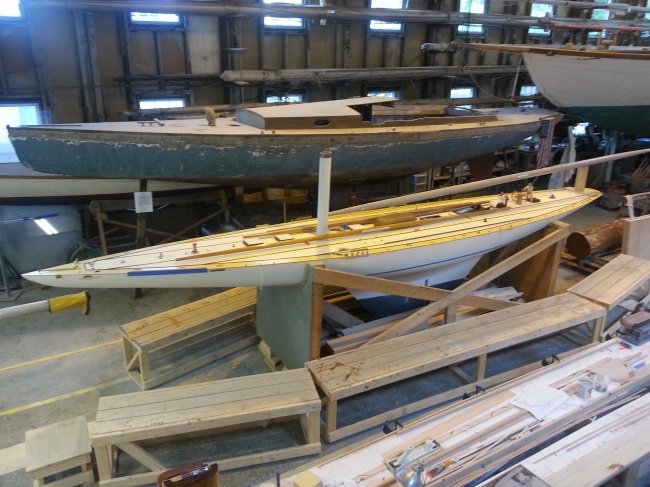 41.663555 -71.273002
Just sent a picture from our “guy upstairs” of Joe Bartram’s nephews Ford and Gris helping us lay canvas. As you can see we are not bashful about asking for help!
On Tuesday we began putting eight toerails and two handrails in place. By close of session we laid the two outer toerails down. On wednesday the port handrail went down.

Worked on toe and handrails on Saturday. The portside has been laid down. Will need some cleanup but it looks great!
Joe also brought his large hatch to work on. 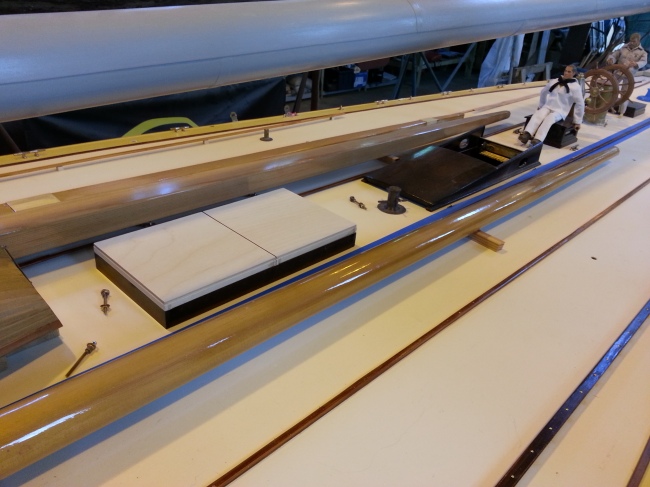 Last week, we worked late for a visit from the USS Constitution Model Shipwrights Guild. We “dressed ship”, as you can see. With all her bling (most of the deck fittings are now in place) RELIANCE really shines and we can really imagine her now with her rigging!
Next we’re onto completing the toe rails, hand rails and spare #2 topsail yard and club to be stowed on deck. Meanwhile Mike has been working on completing the mainsheet traveler, remaining eight bollards, and capstans. 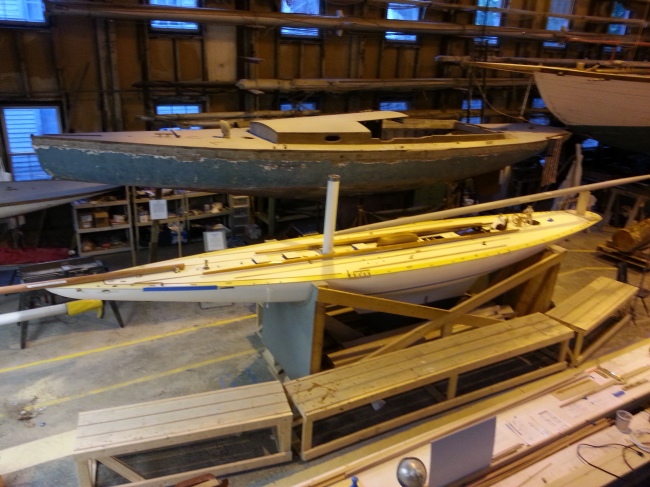 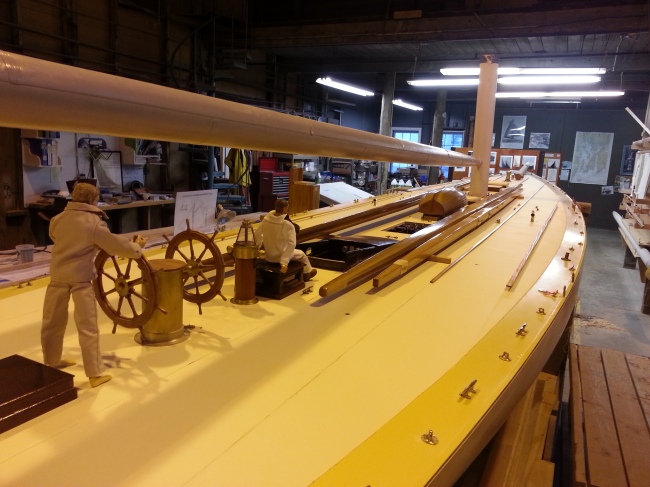