I remain amazed that RELIANCE and crew tell us when to speed up and when to slow down. I’ve been pushing to get going on laying the cork deck on RELIANCE, but she kept telling us it wasn’t time and our volunteers seemed to have other plans keeping them occupied at home. So our focus shifted to other urgent RELIANCE matters.

With great fanfare we were to have started “corking” on Tuesday. But on Monday Dyer Jones took me to the New York Yacht Club to see the Club’s RELIANCE model so we could put the question of RELIANCE hull, deck and spar colors to bed once and for all. The lads wanted to know what to paint the cork once it was laid. (Hah! – a paint story for another day- more confused than ever)

While there I visited their library and found a huge scrapbook of RELIANCE and the 1903 Cup series. I quickly scanned through hundreds of articles, finding one about her launching. At the very, very end of a one page article in THE SUN dated April 12, 1903 I found notation of canvas laid over her aluminum deck. It simply couldn’t be that we were about to embark the next day on laying the wrong material on deck?

After a sleepless night I told the crew  Tuesday morning that we needed to do some more research, and I put out an international email to experts for what they knew. Some replied with articles supporting cork solutions, even one specifying 1/8 inch thick cork. But Claas van der Linde sent two very compelling articles supporting canvas and our Roger Williams University intern Chris Vitale found a June 1903 article by W.P. Stevens in “The Rudder” magazine confirming canvas.

It isn’t that we hadn’t done our research. We had spent significant time and had found a number of published sources pointing to towards cork. RELIANCE knew it just wasn’t time….

Though we are dealing with archives and history more than a century old (and I now have a much greater appreciation for the trials of classic yacht restorers) we are in fact dealing with very modern day problems of accurate documentation. The more things change, the more they stay the same, for example:
– Newspaper, magazine and TV reporters getting the scoop with the latest “quoting well-placed sources”
– Secretive misinformation placed by “sources’
– Urban legends
– Expert testimonies
– Oral histories and testimonies of long ago events

We are in the February 2014 issue of Classic Boat Magazine – a one page article on RELIANCE in a European magazine. Wow!!

The full article is not online… yet. But check here for more info on Classic Boat Magazine and pick up a copy of the February issue.
http://www.classicboat.co.uk/uncategorized/february-2014/

We just received some pictures from the MET School in Newport RI which has been taking our bollards and winch drawings into CAD and then 3-D printing them to use a bronze casting masters. For the current time, we have only pictures of one team member, but we’ll add more as they are received. Just couldn’t wait to show you these!

We’d like to expand our use of 3-D Printing on our project, for boat restorations, and for museum exhibits. Exciting times ahead!!! 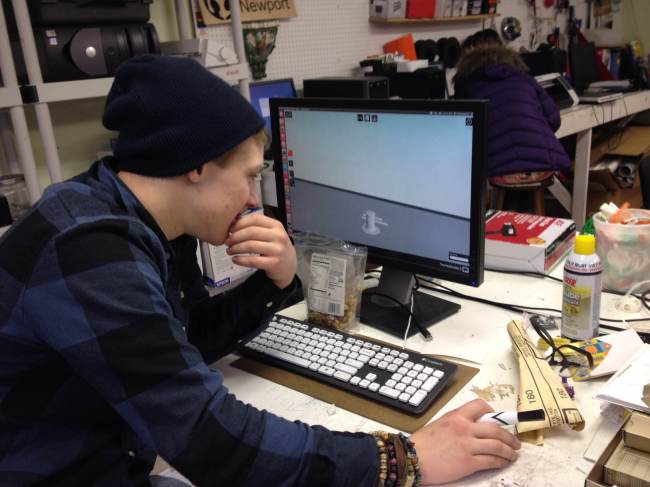