Things are moving fast this fall. We’re working on completing all the deck fittings and soon will be moving on to boom fittings.

Our woodworker who is building our deck hatches, monitor, and companionway is back from summer hiatus. It seems as everyone is really charged up!

In September we received display cradle designs from Roger Martin Design, a naval architect firm. This design is similar to one proposed by the School of Engineering students in their project with us last year. At that time we were not sure how strong our hull and deck were so we opted for “Plan B” as a student project. Now that we have the hull, we are levering their “Plan A.”  It will be quite spectacular! Three 2″ o.d. steel rods will be inserted through the keel. These rods are welded to blocks at 15 degree angles replicating her heeling over and attached to a heavy steel 6′ square base plate. Thus the RELIANCE will appear suspended in air without any stray guywires.

We began this week on a biggest technical challenge, drilling three perfectly center-aligned and parallel 2″diameter holes through 3′ of keel. On Tuesday, we moved RELIANCE under the chainfalls and turned her on her side so we can position the drilling mechanism. Over the next few weeks, we’ll make certain of all our alignments, build the bore jig, and complete the drilling – VERY CAREFULLY!

In the meantime we continue to work on our 4′ real-sized wooden spar cross sections, the rudder, spreaders, and a myriad of other tasks. Enjoy the pictures…. 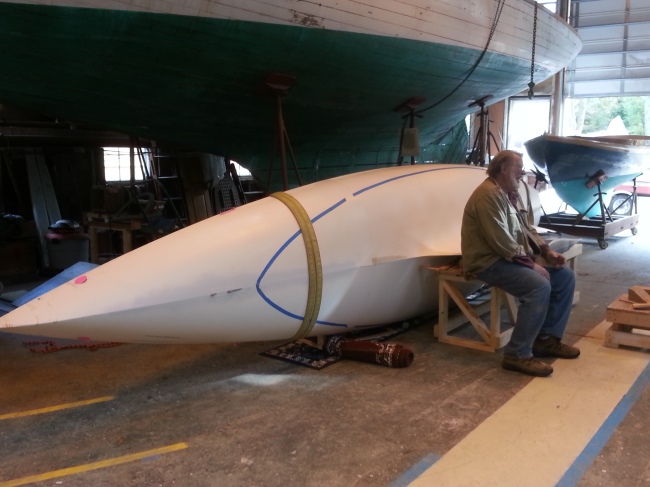 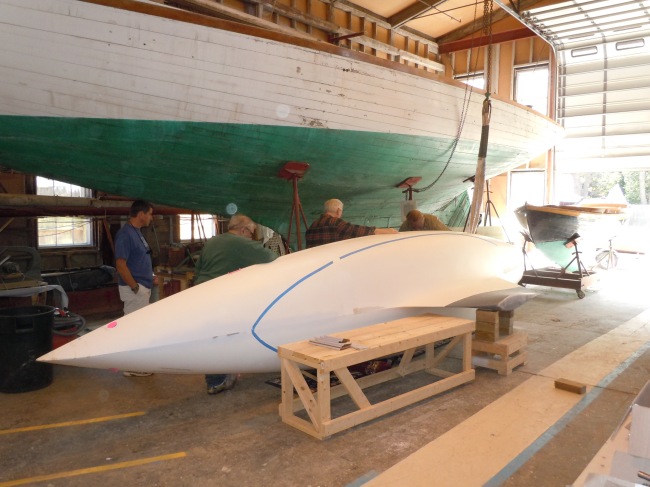 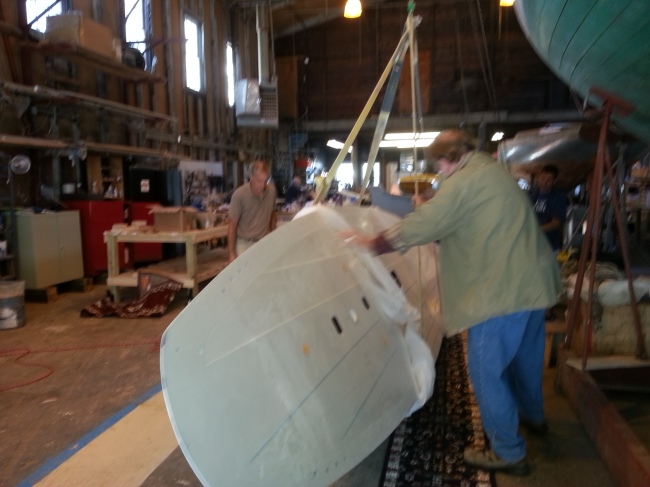 We have a lecture next week that will interest many of you.  Information is below.  If you wish to attend please register online at http://herreshoff.org/store/page24.html or call the Museum: 401.253.5000.

We hope to see you there!

Humble Heroes from a Downeast Island

The America’s Cup yacht races were, and still are, the most prestigious and expensive international sporting events in the world. With a history extending back over 160 years, the America’s Cup reached its height in the late 1800s – the era of J.P. Morgan, Cornelius Vanderbilt, and Sir Thomas Lipton.

Until that time, American yachts in the competition had been crewed by professional sailors from Europe. But in the winter of 1895, emissaries from the New York Yacht Club traveled more than 450 miles by train and steamboat to remote Deer Isle, Maine to recruit an all-Yankee crew. That small fishing town sent nearly forty of its best sailors to New York to sail DEFENDER, and in a difficult and controversial series they defeated the best Great Britain’s aristocrats could muster.

In 1899, the club again sent word to the island that it needed yet another crew to sail against the first of Sir Thomas Lipton’s Shamrocks, and Deer Isle sent their best men back to New York. Sailing COLUMBIA they once again swept the series.

This is the story of these crews who sailed the big, and for their era, high-tech America’s Cup cutters in the late 1800s. Deer Isle’s Undefeated America’s Cup Crews is based on research at Harvard’s Widener Library, at the Deer Isle-Stonington Historical Society, the Penobscot Marine Museum in Searsport, Maine, the Herreshoff Marine Museum in Bristol, RI, Mystic Seaport in Mystic, CT and at the New York Yacht Club itself. With exciting narrative, new insights based on previously unpublished archival material, and 70 beautiful photographs, Deer Isle’s Undefeated America’s Cup Crews finally gives the humble heroes from a downeast island the credit they earned so long ago.

This is our annual Carlton Pinheiro Lecture in honor of our former curator.

Our lecture series is sponsored by

We are building 4’ long sections of real-sized mid-sections of the wooden:

The topmast, yard and club will be shown together as a display, with the topmast and yard vertically next to each other, just as they would have been when sailing, and the club lying horizontally next to the yard.

Shown below, we have cut our douglas fir lumber to dimensions with the help of Dan Shea.(all the wooden spars were douglas fir for lightness and bending strength–the original topmast being douglas fir but changed to sitka after a June 1903 dismasting and the club increased in cross-section size of 7 ½” x 6 ¼”) 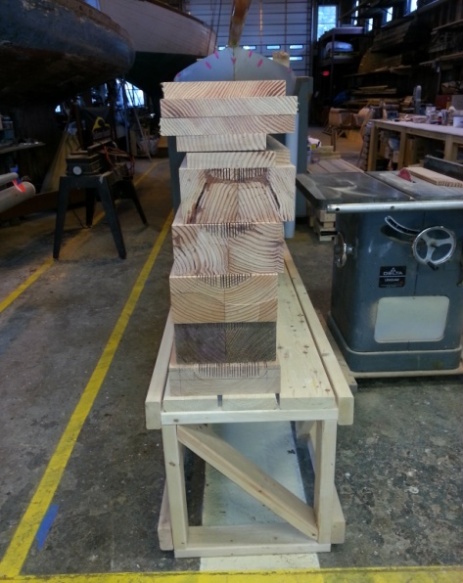 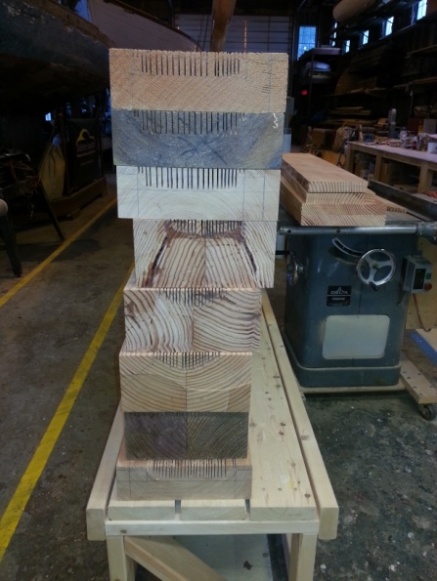 Third: Kerfs have been cut into these planks to aid in chiseling and planning out the centers. (If you count, there are extra yard pieces. We have made extras yard sections from leftover pieces we have, and hope to sell these as furniture/ fund raising displays, but more about this in the future)

Off to Dan Shea’s shop next door (Check out his Bristol Boat Company website bristolboatcompany.com ). His expertise is so valuable and he has really big tools, so we’re jealous! We also used his planer to get planks to the right thickness. Yard top is shown in left picture and topmast in the center picture, and lumber back in our shop in the right picture.  Dan wears the red shirt, and Bill Lawton waits to catch the pieces.

A one-sixth scale model of RELIANCE is huge – our boom, for example is a foot longer than an S-Boat boom! Yet visitors have seen “big boats” such as BELISARIUS in the Hall of Boats, America3 on the lawn, and even our TRIVIA in building 28 and somehow equate them to a grown-up RELIANCE. Those who know of the J-Boats often think of RELIANCE as a J-Boat.

So, the first thing visitors see when they come in our door is the outline of the real 115’ long boom, 112’ tall mast, and 40’ 7 1/2 “ long bowsprit on the floor. We’ve also placed a 2’ x 14 3/8” diameter solid wood bowsprit section on the bowsprit outline. These usually get a “holy smoke” – like comment! Finally, we are making 4’ sections of the wooden hollow spars.

Our intern Aaron Towers has been instrumental in fashioning the bowsprit section. All that is left when the weather cools off and gets dryer is to varnish it and build a display cradle. We’ve placed the inboard end of the bowsprit outline under our scale bowsprit so visitors can see up-close the impact of scale.