We’ve finished our the basic construction of our boom and will put it aside until we’ve completed fabricating the sail track and casting all the fittings that go onto the boom.

As shown on the accompanying sketch, the original boom was fabricated metal, with steel plates riveted over rings and angle iron stringers. Rivets were ground flush so in our scale they would not appear. Much of the boom was a “straight stick” of 21″ diameter; with common upper and lower plates (shown as B-1 which were 14″ long and rolled half round). It would appear that this simplified construction. The top halves overlapped the bottom halves, while the ends were butt-jointed together and fastened inside and out to straps with rivets. As mentioned, these plates were also riveted to rings and stringers. I imagine that they must have made a jig or tool to buck the inside end of the rivet, but would appreciate any insight from our readers. I cannot imagine there was anyone small enough to fit inside these rings and the 21″ diameter pipe! Typically, there were four rings equally spaced 3’6″ inside each section of plate and plates were jointed half-way between adjoining rings. Top and bottom plates were alternatively arranged to minimize weak points.

We built our boom of “Lawton Steel” named for our chief woodworker; hence wood made to look like steel. We laminated two 20′ long douglas fir 1″ x 4″ planks together to make a top and bottom. From a fifth plank we cut two 1/2″ strips which we glued a little proud of the edges of the second lift of the bottom half. Thus, the final shape would be of five planks and almost square in profile.

We routed out the insides of each half to give us walls of 1/2″ in thickness, which we believe to be strong enough but as light as possible. After shellacking the inside hollow portion we glued the halves together. We marked lines on the square profile to represent edges for an octagon and then planed these to perfect octagonal profile. Next, we knocked of these edges and sanded until we were nearly round. At this point we created our overlapped upper plate joints with thin strips of basswood, filling in as necessary with Bondo. Thin basswood strips were also added to represent the butt joint straps. We painted our boom with several coats of primer, sanding between each coat until we achieved a metallic finish.

We’ll put on a final coat of paint, but for now our boom hangs in its rack awaiting completion of the many cast fittings that’ll be attached later. 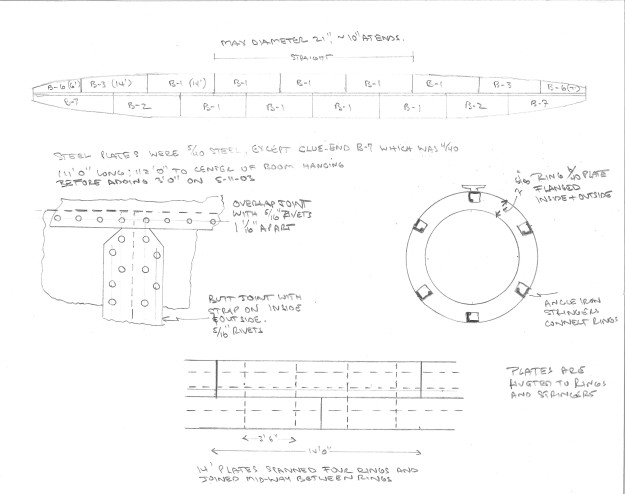 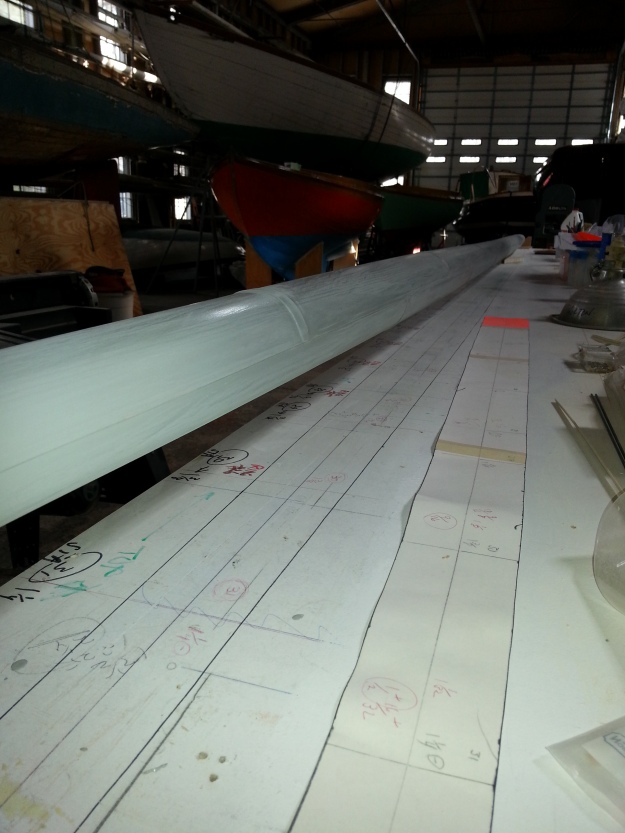 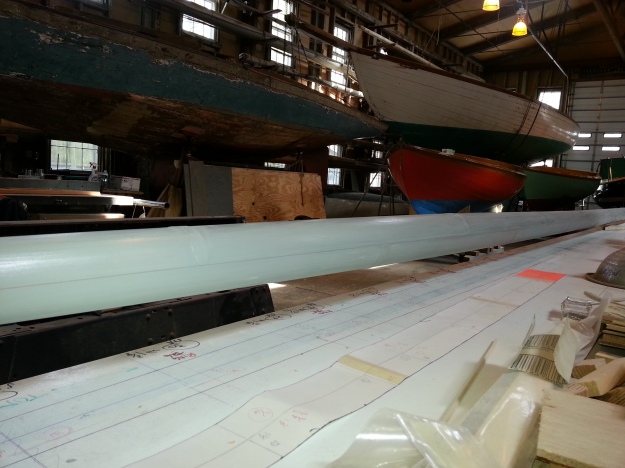 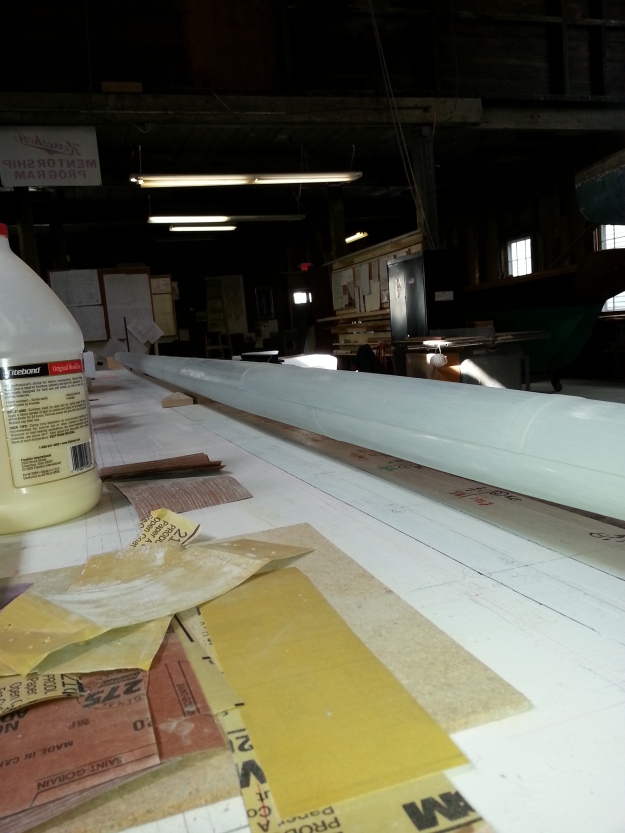 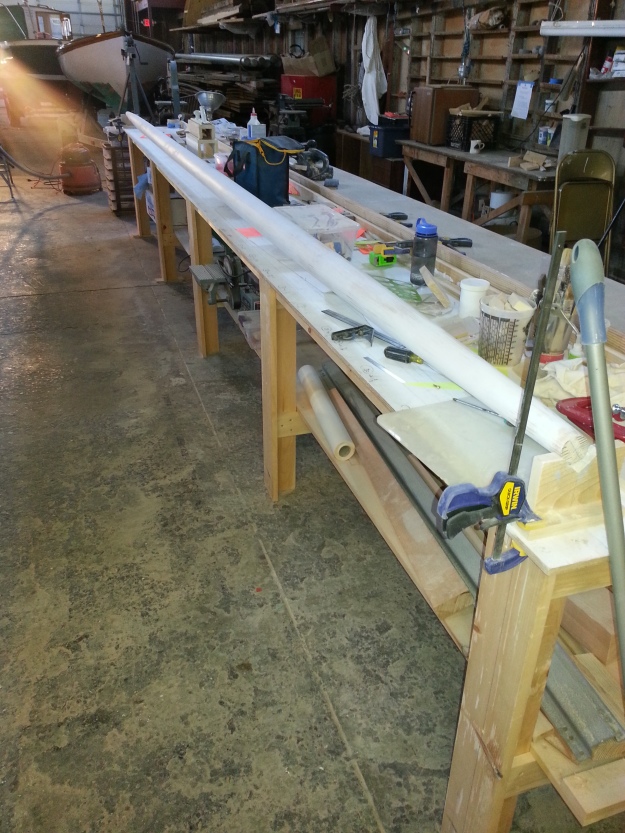 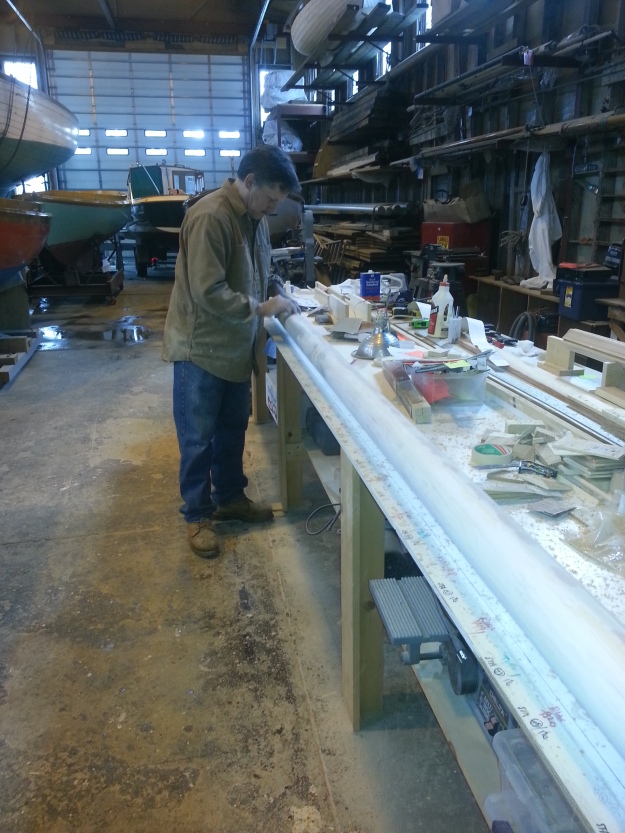 Tim does final sanding on boom 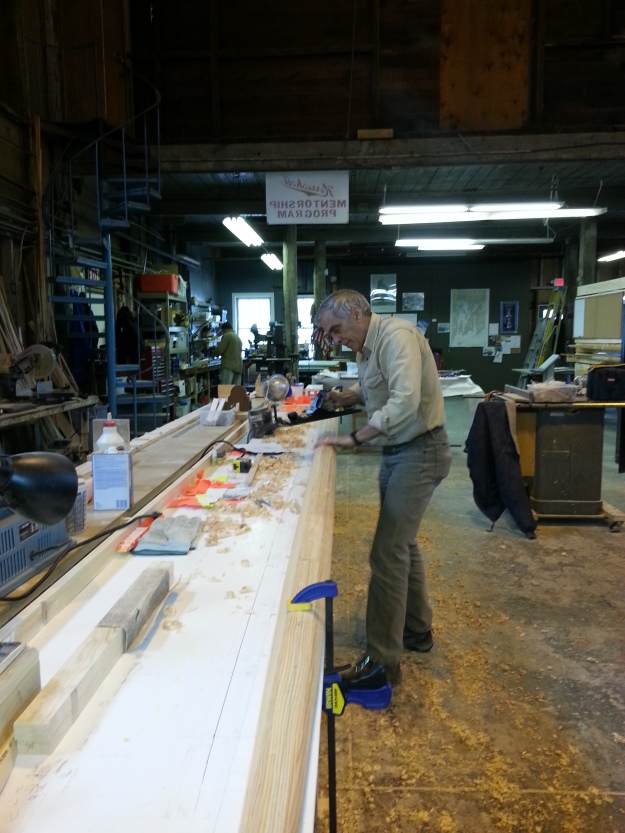 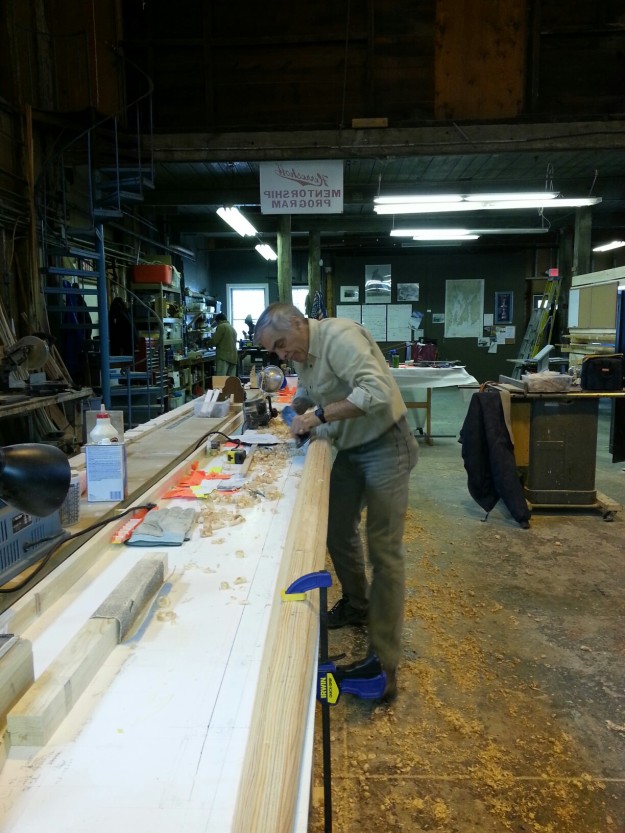 Keith knocks corners off the octagon 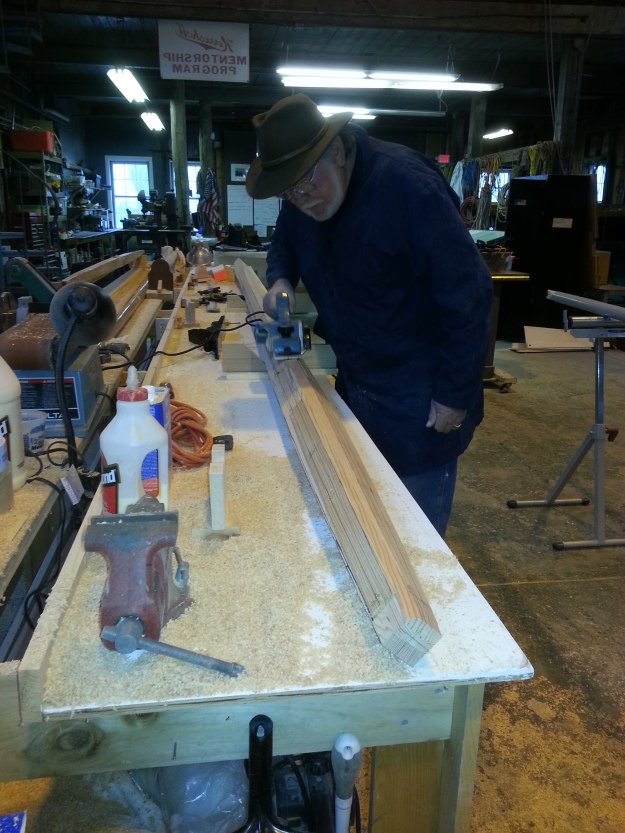 Squared boom is made into an octagon 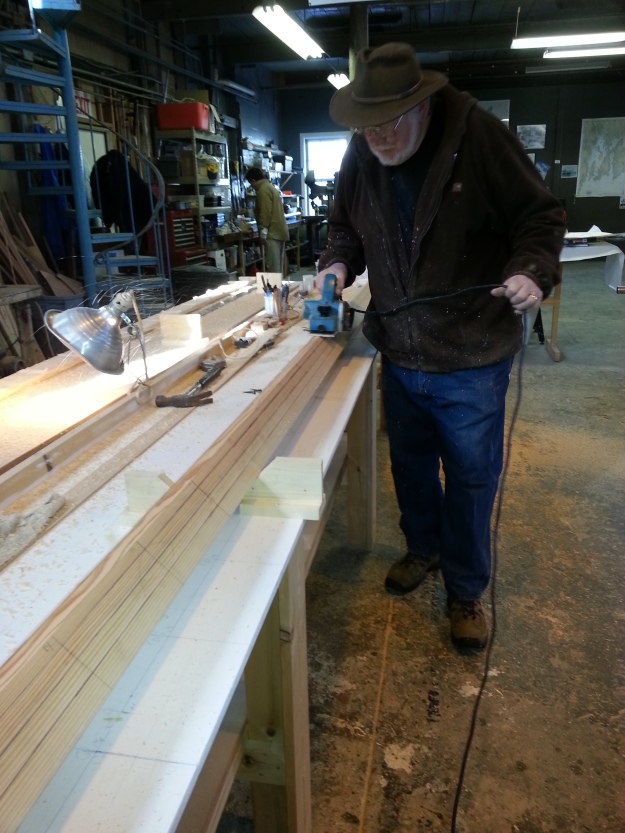 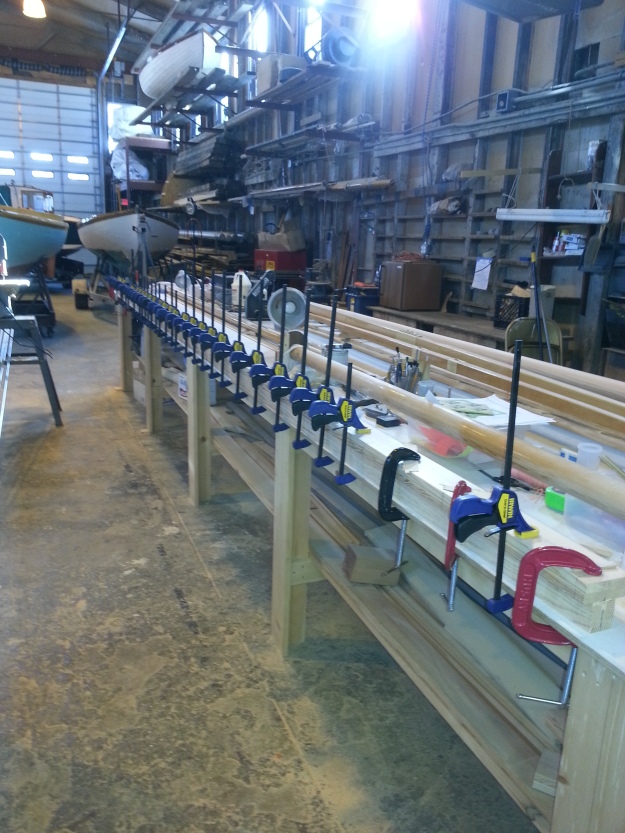 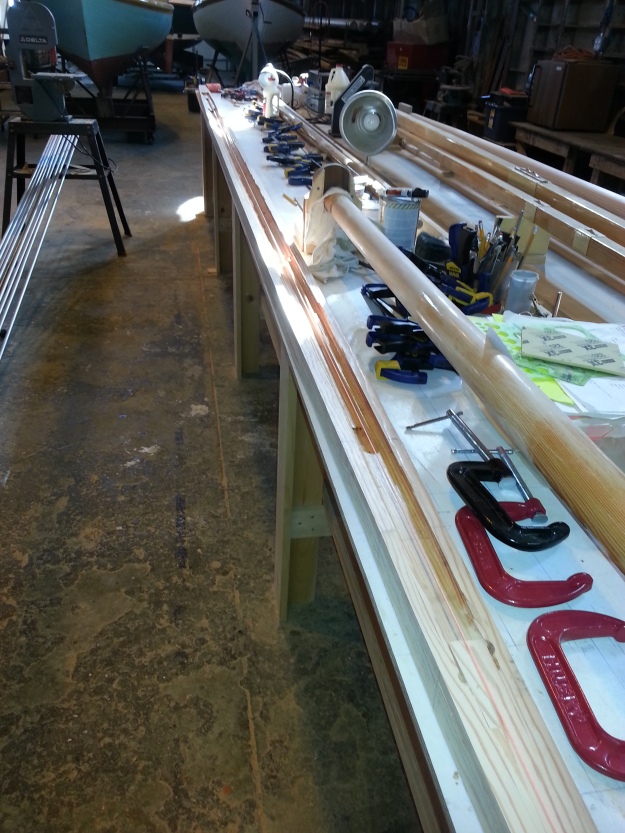 Ready to be glued together 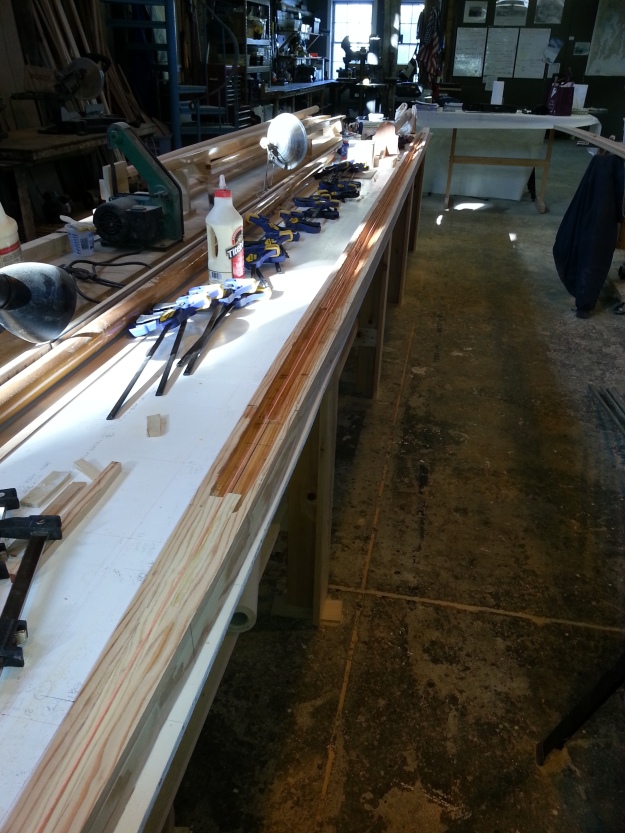 Insides have been shellacked 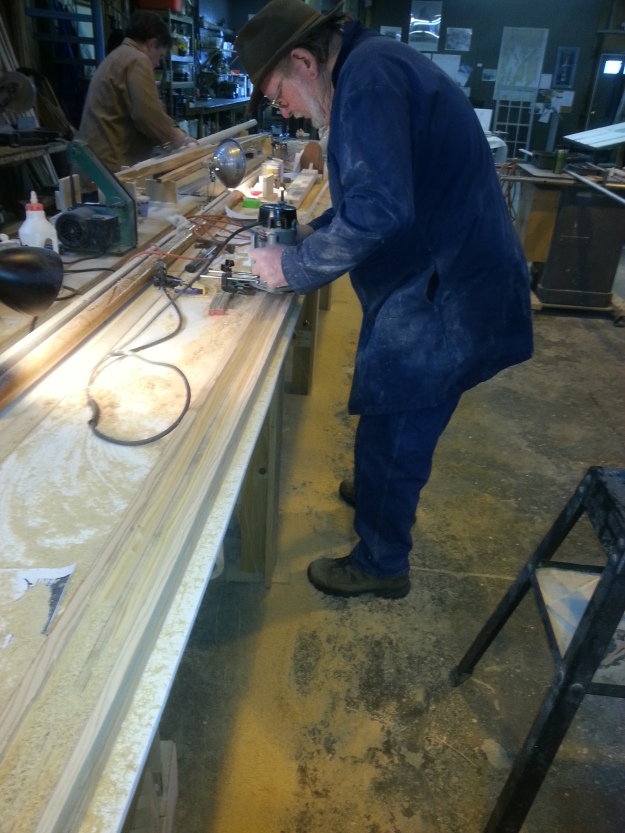 Bill Routs out other half of boom 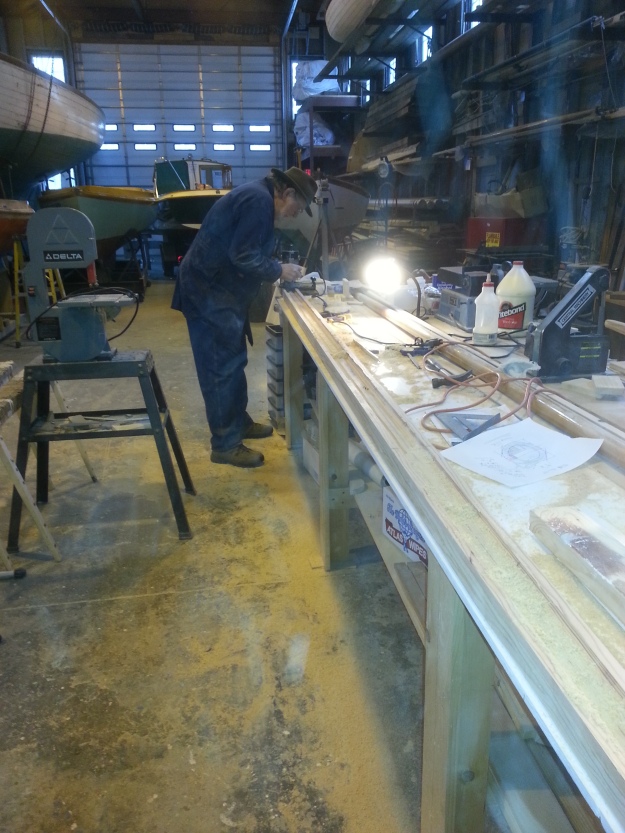 Routing out hollow boom half

1 thought on “Finishing the Boom”