The excitement about the forthcoming launch of the new cup defender had been building for days. The usually quiet little burgh of Bristol took on a holiday atmosphere with bunting and flags decorating its streets and homes. On Saturday, a sunny clear day with moderate winds, thousands arrived by special trains until in the hour before launching, the wharves for half a mile on either side of the Herreshoff south boat shed were literally black with people. In the water more than one hundred small craft, the majority occupied by newsmen or photographers, were grouped on either side of the marine railway.

Doors of the big shed opened for ticket holders at 5 PM and at the appointed hour of 5:30 RELIANCE, on her cradle, was slowly lowered down the ways. Just as she started, the sponsor Miss Nora Iselin broke the traditional bottle of wine with a hammer saying: “I christen thee RELIANCE and God bless you. Success.”

She floated clear some ten minutes later to the cheers of the crowd and the tremendous screeching of whistles from the assembled steam yachts, the crew tender SUNBEAM and the US Navy torpedo boat CUSHING. Thus began the illustrious career of the greatest of the America’s Cup yachts. 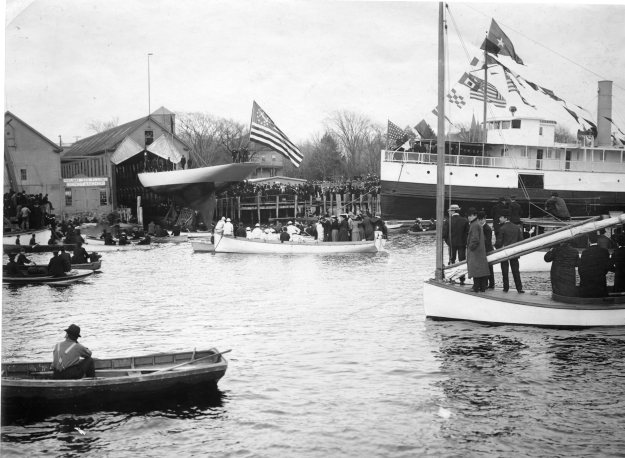 4 thoughts on “RELIANCE, The Hope of America Afloat”